MystiCon was amazing! I stayed busy, as usual, the entire time I was there. I had 5 panels and 1 book signing.

I arrived in Roanoke on Friday afternoon. A nice change this year is that Joe lives in Roanoke. So I packed some clothes, my books, my cats, and hit the road at 1:30 on Friday. After wading through a few construction sites and dealing with a little unexpected cat poop (Ziggy Piggy just couldn’t hold it), I got to Joe’s house with a little time to spare before my 4 o’clock panel, New Author  Boot Camp. I unloaded my car, got the cats settled in, dumped the cat poop in the litter box, then….tried to salvage my nails.

Did I forget to mention the horrible manicure I’d gotten that morning? H.O.R.R.I.B.L.E. HORRIBLE! Seriously. The guy cut my pinky and index fingers so badly that I bled. So once I was settled in at Joe’s, I took a few minutes to try to fix my nails. Spruce them up a bit. Sadly, I only managed to make them look worse.

“No biggie,” I told myself. “Just remember not to use your hands when you talk.” (and after that, I sort of forgot about my nails for the rest of the weekend.)

New Author Boot Camp was a great first panel to kick-off to the weekend. It was moderated by S.H. Roddey who is a total pro. Having a good moderator on a panel makes all the difference in the world. Not only do they ask questions, but they also make sure everyone gets a chance to speak, control the room, and ensure people in the audience have an opportunity to ask questions.

In this panel, we discussed mistakes we’d made, our creative process, and the importance of treating our careers like a business (which turned into a theme for the weekend). My biggest takeaway, however, was when we talked about branding. More on that later. 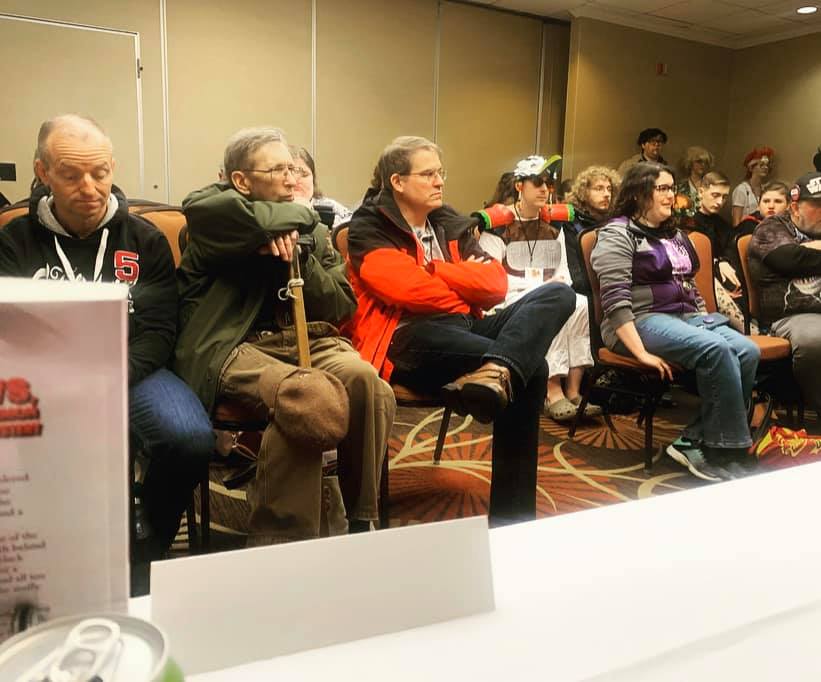 I won’t go into detail about each panel, but I want to share a couple of things. Monsters are People Too, moderated by Darin Kennedy, was my favorite panel of the weekend. Creating believable monsters is an art. It was interesting to hear how others create their monsters.

Darin asked if our monsters were motivated by something or if they were simply evil for the sake of being evil? Sometimes it’s fun to create a villain who does bad things simply because they enjoy it. It makes reasoning with the bad guy hard for the protagonist when the antagonist is 100% unreasonable. When the antagonist enjoys being bad.

We also discussed the impact of POV in determining who the villain is. Beowulf was discussed as an example. The villain could easily change depending on whose POV you read the story from. Beowulf or Grendel. We also discussed some of our favorite monsters on TV and in film. I got so much out of this panel. I could have sat in the audience, shut up, and been perfectly happy to listen to everyone else speak.

The other thing I’ll touch on is something that was discussed a lot over the weekend. Branding. Branding is something I’ve struggled with. It seems so extra and unnecessary, but in today’s social media-driven world, writing good books simply isn’t enough. Authors have to find a way to distinguish themselves from others, and branding is one of the ways to do that. “You’re not just selling books, you’re selling yourself,” was said on a few panels. This is hard but good advice. I would love to be able to simply write and sell books, but that’s not possible for most authors. So I have to embrace branding, and at the same time embrace who I am. Lookout at the world 100% myself with no fear or apologies. This is what I do and these are my worlds. Join me!

The supreme highlight of the weekend for me, though, was having the opportunity to sit beside Larry Niven (yep, you read that right) on the You Gotta Start Somewhere, panel, moderated by Grig Larson. Despite his success, Larry Niven was surprisingly humble. He didn’t dominate the panel, though he could have and everyone would have been perfectly happy to listen. He had great knowledge to share and happily shared it. At one point, he said something that has stuck with me. “The things you do as a youngster become your annuities when you’re older.” So true.

Until next time…Happy Reading!

0 comments on “A Weekend at a Con”